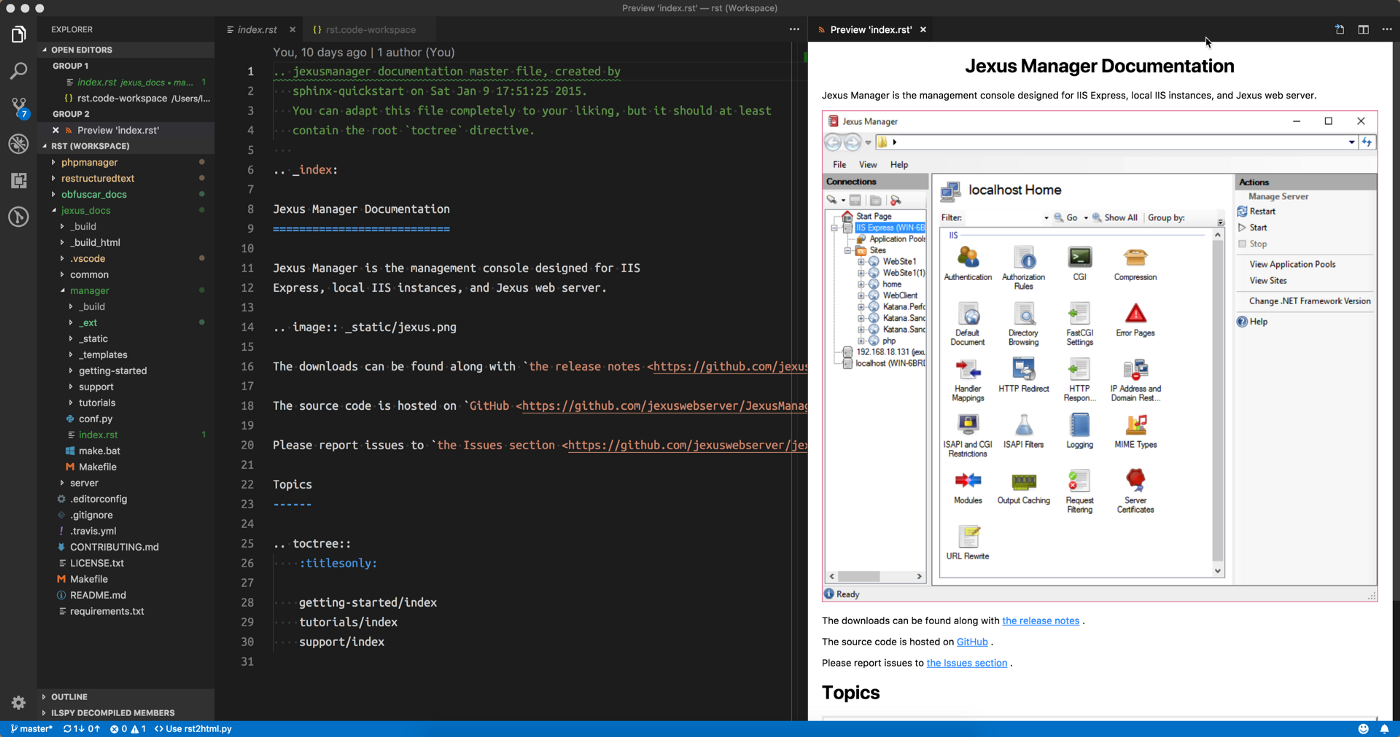 An image should save me a thousand words, but I rather write a blog post to reveal the biggest changes introduced in the latest releases (67.0.0 and above), so that you, the dearest users, have a chance to know the stories behind.

You can see from the left side of the image above that I was using the Workspace feature of Visual Studio Code. Workspace was added in VSCode 1.14, and allows users to group multiple folders in a workspace. The design of this extension always assumes you work on a single folder, so Workspace was not supported.

Even for a single folder, you might have multiple conf.py to work on, and switching the preview setting between them was painful. Manual editing .vscode/settings.json was not fun, and as one of the users I felt the same. However, to make a systematic change on the code base was not an easy task.

Tormod Landet approached me in June with a simple pull request.

It contained some code interesting that made it later possible to innovate upon, where he attempted to scan the folder structure for potential conf.py candidates. I left a hint on the C# extension, and hoped that we could revisit this idea later this year when I had some more time.

But Tormod was more energetic than I thought, and he was able to work alone and deliver a second pull request.

This time he added a pop-up list and status bar element, so active conf.py file can be easily observed.

Unfortunately I was delayed by other things and just recently reviewed his changes (made in early July). There were a few minor user experience issues, which I went a head and fixed.

So if you are using this extension for the first time (or assume you just upgrade from an old version), the usage is simpler than ever.

Simply open a folder or workspace, and navigate to a reStructuredText source file .rst. Trigger a preview via shortcuts or clicking the preview button. Then this extension would prompt you to choose an active conf.py file to generate preview pages,

Note that you can also choose rst2html.py as an alternative preview rendering engine.

After that, all preview pages would be rendered according to this active setting, showed in status bar,

If you want to work on another conf.py file (or switch to rst2html.py engine), simply click the active file in status bar, and the extension would prompt you again with the options.

Thus, you no longer need to remember the extension settings and manually configure them (though in edge cases they might still be helpful).

I just shipped the 81.0.0 release of this extension. As it is worth a blog post, you can see how big the changes are there. Summary on Improvements First, a Microsoft guy approached me and infor...

Everything Good And Horrible About PowerShell Gallery

Yet Another Official Launch of LeXtudio